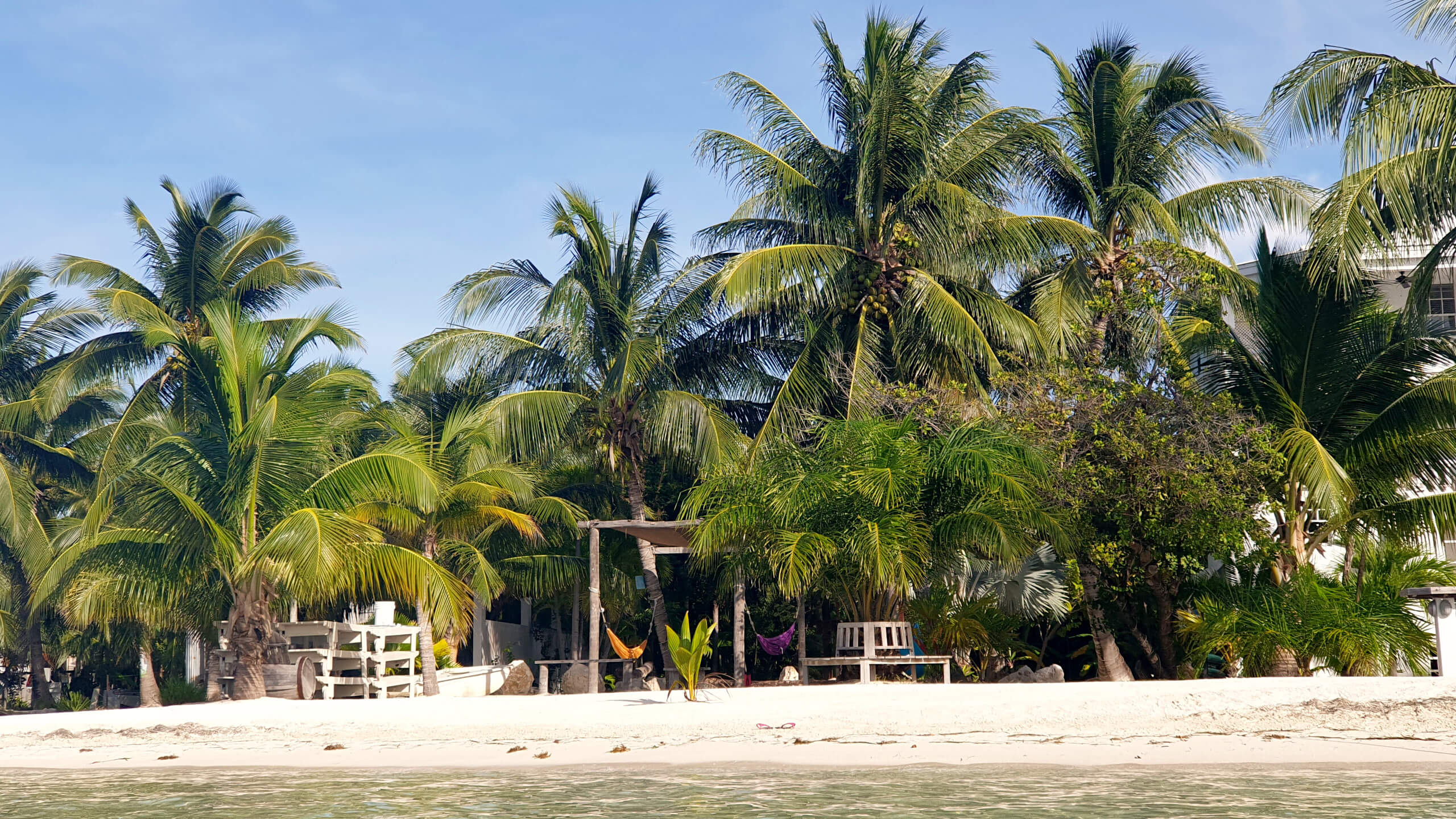 Belize isn’t a cheap country at the best of times. And, the pandemic has only increased the costs of just about everything in the country. In part, due to its specific entry requirements. We had ummed and aahed about going to Belize a couple of times already in this trip.

Firstly, back when we were in Bacalar – a town that is just a few miles from Belize’s northern border. But, the borders had only just opened and we thought it would be too quiet for us. Plus, we had plans to see a lot more of Mexico. Then, when we were in San Francisco, we thought about flying there and then heading to Guatemala. We were looking for somewhere special to spend Adam’s 30th and it seemed like a good option. But, then the costs kept adding up and the idea was axed when we saw it costs 75 USD for an antigen test to leave Belize for Guatemala!

But, just a few weeks later as we arrived in Flores, we saw tour companies offering shuttles all the way to Caye Caulker for around £30. This was so much cheaper than any flight from the US and a lot less than what we were hearing people paid coming from Mexico. Suddenly, we were back talking about the idea again.

To enter Belize, you need to tick off three entry requirements: taking an antigen test at the border (no other tests accepted), three nights booked in an approved hotel or hostel (those that have passed public health inspections specifically for corona) and travel from the border with an approved transport company/taxi.

We thought these would all be expensive since the entry antigen test alone is 50 USD. But, with the revelation that we could get the approved transport – including the ferry to the island – for £30, we quickly looked into hostels. And, to our surprise, even the cheap hostels made the list. £8 a night for a dorm bed on the slightly expensive Caye Caulker was a bargain! So, it was decided, we were going to Belize!

Another reason we had been hesitant to go to Belize was the weather. It had rained pretty much non-stop since the moment we arrived in Flores. And, people all across the Caribbean coasts of Mexico, Belize and Honduras were posting in Facebook groups asking where to go as the weather was so bad. But, with the opportunity of a new country – one that would be hard to get to if we wanted to visit just there in future – we were determined to go. At least we knew the weather would be terrible!

We were the first people at the Guatemala-Belize border that day. The Belize side doesn’t open until 8am, but we cleverly made a head start by completing the exit formalities for Guatemala at 7.45am. In total, the border crossing took us 1 hour and 15 minutes. Most of which, was because we had to fill out about 5 forms for Belize. And all of them wanted very similar information! Waiting for the test results was the worst part as I always dread that it’s going to be positive. But, we were negative and cleared to cross the border!

When we finally made it to Caye Caulker, almost 8 hours after leaving Flores, the skies were grey. You could tell it had been raining as the sandy streets were filled with pothole puddles. For the first couple of days, walking anywhere took twice as long as usual as you’d have to frustratingly zig-zag across the streets. And, the backs of my legs would end up covered in cement-looking wet sand flicked there by my flip flops. It wasn’t a great first impression.

Aside from a lot of ‘You Better Belize It’ puns, ‘Go Slow’ is the motto of Caye Caulker. One, that refers to all aspects of island life. There are no cars on the island, so everyone gets around by golf buggy or bike. And, the vibe of Caye Caulker is like nowhere else we’ve been yet. Everyone is so laid back, there’s no aggressive street selling, no pushy tour companies and no pretence.

Go Slow was a motto we took to heart. We already knew that we travelled slow. But, this was a week for resting in paradise. And luckily, as soon as we arrived the weather improved. The island and sea look 100x more magnificent in the sun!

For the most part, we laid around in our air-conditioned room and we laid around on the man-made beaches of Caye Caulker. Sometimes, we bobbed around in the sea. And, every day ended with tasty Caribbean food in one of the many small, independent restaurants around the island.

But, for all the laying, we did manage to fit in two activities. On one of the days, we hired bicycles and cycled around the island. Although, this did end up being one of the hottest days of the week. And within a couple of hours, we were back at the hostel – with faces like tomatoes. Too hot for real exercise.

The second – and our absolute highlight of the week – was a snorkelling trip off the coast of Caye Caulker. Throughout the day we visited a handful of different locations and go swimming with some of the most beautiful sea creatures.

If you’ve read a few of these travel diary entries, you may start to see that I am growing an obsession with sea turtles. First, we released individual, newly-hatched sea turtles in Puerto Escondido. And then, we watched newly-hatched baby turtles be released in El Paredon and took a boat trip to their feeding ground in the mangroves. I even have a turtle ring from Taxco and a knitted turtle – that hangs on my backpack – from San Jose del Pacifico.

So, I was over the moon that the first animal we saw off the boat was a turtle! A fully-grown adult living its best life in the wild! Seems those egg protection and baby release programs are working! We also swam with stingrays, nurse sharks, all manner of fish and Adam even fed the birds by holding a fish in the air! We got to swim over a sunken barge that was now covered in coral and sea creature habitats and threw fish to piranhas!

Belize was full of surprises! I knew it was a former British colony and I knew the national language was English, but I didn’t expect it to still have so many British influences. I was taken aback when we withdrew Belize dollars from an ATM only to find the face of Queen Elizabeth on all of them! Queen Elizabeth 70 years ago that was! They haven’t bothered updating her image like in the UK, she’s still 20-something in Belize!

Then we found baked beans in the shop. Of the Heinz variety! When we see beans on the menus here we can sometimes forget that it isn’t going to be baked beans. But, after 6+ months it was time for some beans on toast!

Next up, was the biggest surprise of all! I’ve spent 6 months complaining about the quality of chocolate in Mexico, the US and Guatemala – and having to survive on Kit Kats and Kinder Buenos (good, but not top tier). So, you can imagine my shock and surprise to see that they sell Cadbury’s Dairy Milks in Belize! I was slightly disappointed at first as the first shop only sold fruit & nut – eww. But, I soon found the God tier, ordinary Dairy Milk. For best results, keep it in the fridge and then remove it until it heats to the UK ambient air temperature – too much and the temperatures in Belize make it a melty mess!

After Belize, we were embarking on a marathon of a journey back through Guatemala to Honduras. Trust me, it’s not a story you’re going to want to miss out on!