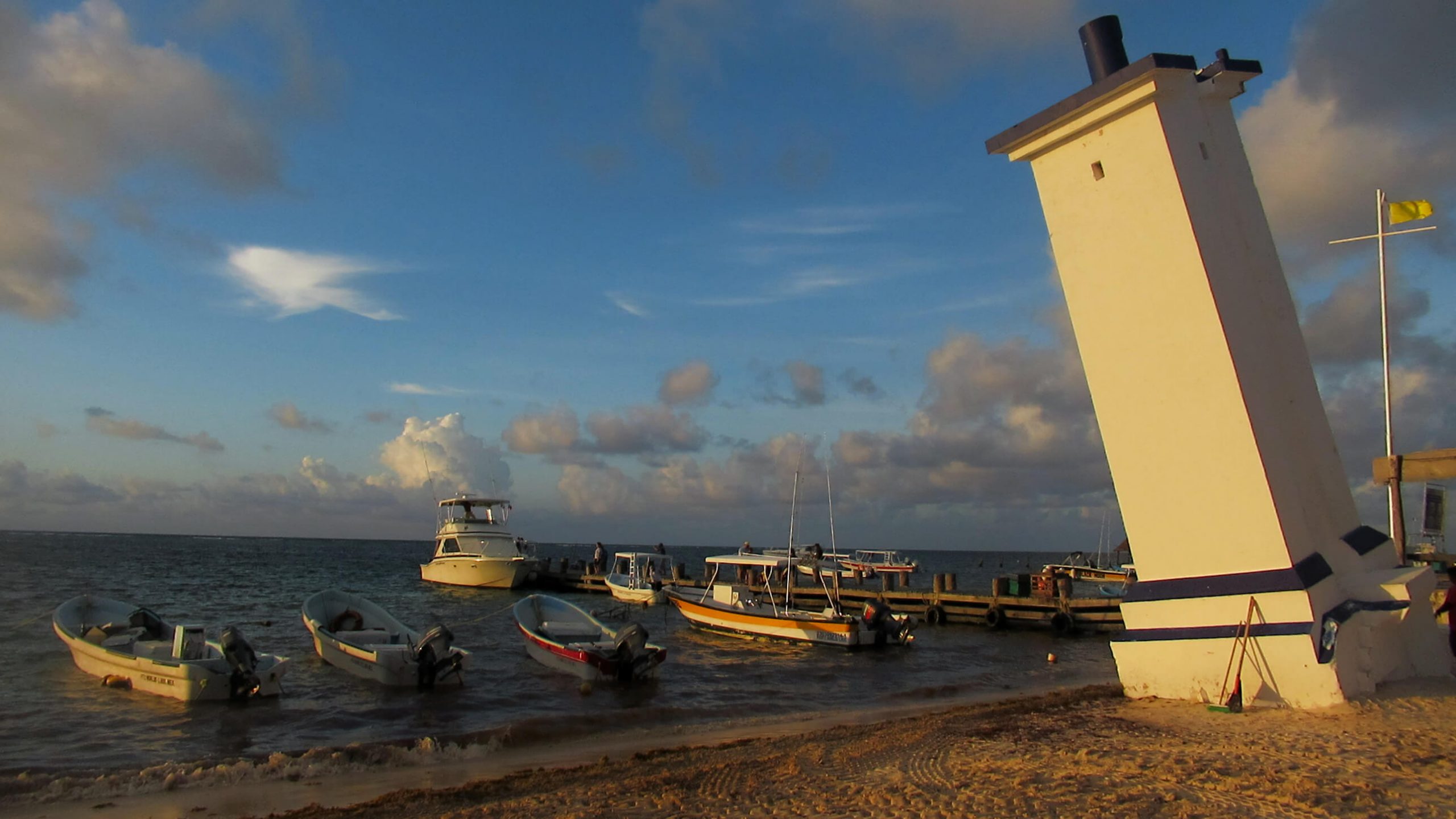 We had quickly realised that the Cancun hotel zone was not for us. I can’t put my finger on it but perhaps it was when we asked to pay 37 USD to watch the Champions League final in a bar or the clubs that blasted music until the early hours or the fact that there really wasn’t that much to do. With said realisation, we promptly booked a week in the coastal town of Puerto Morelos. We were told it was quiet. Perfect!

Located halfway between the two tourist hot spots of Cancun and Playa del Carmen, Puerto Morelos is a world away from the strips, nightclubs and hoards of American tourists who have practically made Quintana Roo an additional US state. And, it was the perfect place to relax after 3 weeks of homelessness in the UK and a week moving between Cancun and Isla Mujeres battling jetlag.

We spent the week basically living inside our hotel, aside from venturing out each day for a trip to the supermarket and dinner in the nearby restaurants. And, who can blame us? There was a rooftop pool and terrace that we had to ourselves every day. Plus, we’d even asked for (and got given) a room upgrade, so we had a double bed each and enough space to work separately on our laptops or watch different TV/films (We Hotel Puerto Morelos, if you’re wondering/wanting to stay!).

Our last couple of days in Puerto Morelos coincided with the Mexican elections – an event taken very seriously. Buses and shops displayed signs urging people to vote. While, Mexican police patrolled the streets in the wake of a string of election-related violence and murders across the country. Nothing quite reminds you that you’re in Mexico like seeing 3 police officers armed with sub-machine guns being driven around in the back of a pick-up truck in a sleepy seaside town.

The election also sees the enactment of Mexico’s dry laws. While each state in the country sets its own laws on this, in Quintana Roo, no alcohol can be sold or served on or for 24 hours before election day. The elections were on Sunday 6 June, so this also covered the Saturday. I can’t imagine an equivalent law ever going down well in the UK. I think the whole country would abstain (from voting, not alcohol) in protest!

After a week in paradise, it was time to move on to our next destination. And, with our first collectivo experience, we travelled around 40 minutes south to…

Many long-term travellers stand by the mantra of book one night in a place and if you like it book more, and if you don’t, then move on. Desperate to avoid the hassle of constantly moving (and repacking our backpacks constantly), we had booked four nights in Playa. So, you can imagine how trapped I felt when after the first evening in Playa, I was desperate to leave.

The city felt tacky. The main strip (called 5th Avenue) was tortuous as every shop and restaurant harassed you when walking past. ‘No gracias’ acted more like an invite to keep going rather than leave you alone. And, thick, black seaweed covered the beach. But, not just the beach but also the first 50 or so metres of the sea. Like an oil spill but with smelly seaweed. I wondered just what we were going to do for the next 4 days.

Luckily, we were staying at one of the best hostels that had daily and nightly activities (Che Hostel Playa del Carmen, if you’re wondering)! Our previous two hostel experiences in Isla Mujeres and Cancun had been disappointing. Firstly, due to a lack of social activities and, secondly, that most people were staying there long-term to work. After our disappointing first evening, the next day we joined a group outing to Mayakoba, an ecological reserve, to learn about and see their preservation efforts as part of their Reef Week. This ultra-exclusive resort is home to 4 hotels. Many of the rooms having private pools and private jetties. Prices start at around £500 per night! We got to decorate coral growing pots and see inside an underground cenote. As well as going on a boat tour of the mangroves. With the added bonus that it was all for free! We only paid for the collectivo to get there and back!

The other best part of the hostel was the nightly activities at the bar, which start with a free cocktail-making (and drinking) activity, followed by ladies drinking for free for half an hour. Then, there’s normally some kind of theme such as the Aloha party or karaoke. The final night felt like our June 21st experience that so many people at home had imagined when the lockdown easing steps were first announced. The hostel was full of Brits and it was only right that karaoke songs including Mr Brightside and It’s Coming Home were being sung by everyone in a packed bar! #BritsAbroad

In the end, our four nights passed really quickly and it was time to move on again! From Playa, our next stop was to be Merida, with a tentative plan to follow this up with Valladolid (and Chichen Itza) and then Holbox.

(Weeks 3 and 4) Mérida and Valladolid