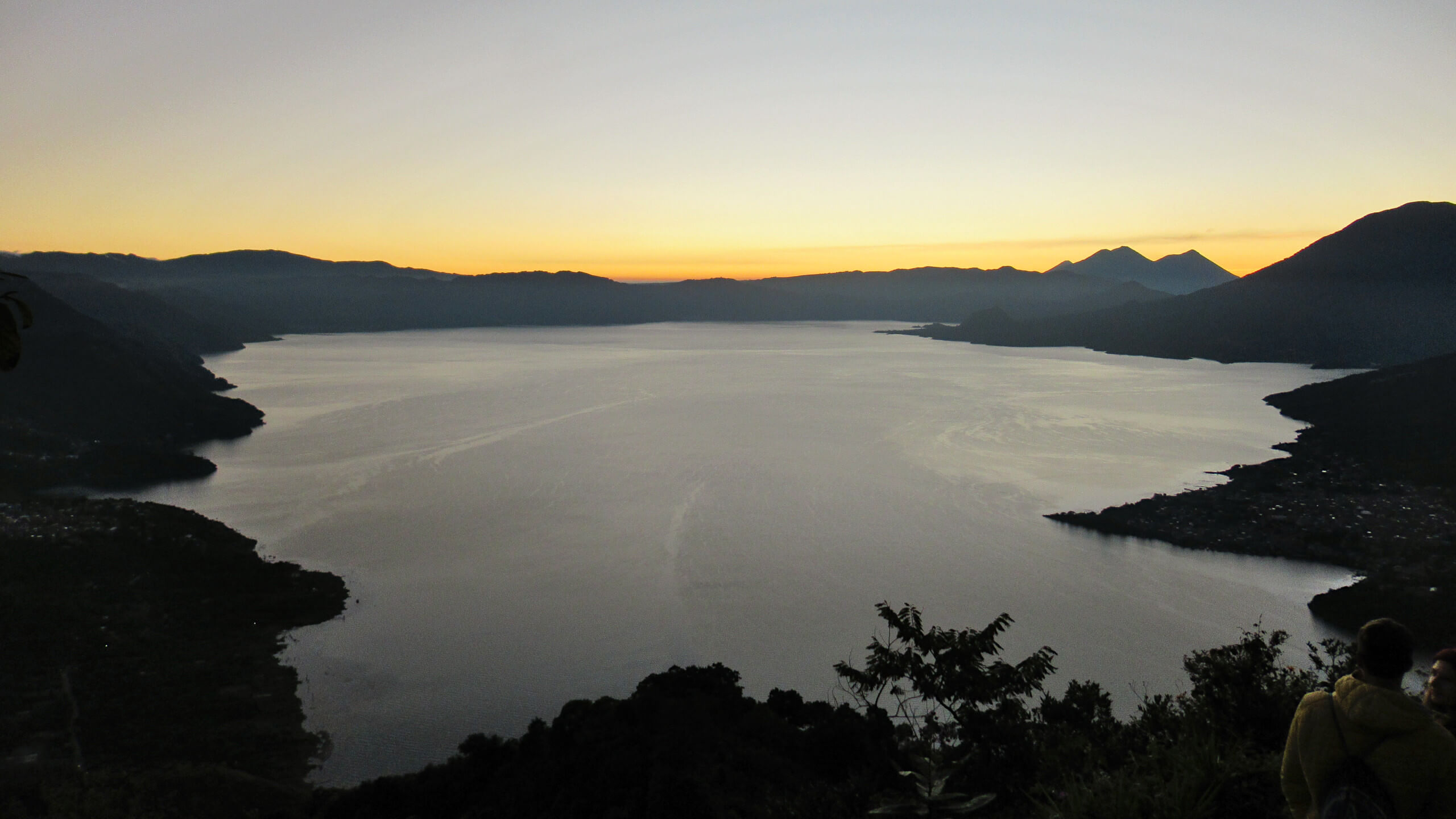 Guatemala was not so slowly becoming one of my favourite travel destinations after the first few weeks in Antigua and El Paredon. And, the following weeks in Lake Atitlan, Lanquin and Flores only cemented that further. Guatemala is such an underrated place for backpackers. It’s perfect for a month-long trip and can easily be combined with neighbouring countries for those looking for something longer.

Just two hours from Antigua is the beautiful Lake Atitlan – the deepest lake in Central America. It’s a place popular for relaxing and for partying. I was definitely in the relaxing camp. Around the lake are many small towns connected by regular water taxi services.

The first 4 nights we stayed in the quiet town of Santa Cruz. From here, we took half-day trips to Panajachel and San Marcos for a wander and for more variety in restaurants than what we had in Santa Cruz. Not much to report as we really did very little and it was wonderful!

A personal highlight was West Ham beating Liverpool. A game that I tried and failed at streaming on a 0.5 MB internet connection. But, at least Twitter kept me informed.

Luckily, after Santa Cruz, our next stop on Lake Atitlan was San Pedro where the internet was significantly better! So, I could watch Match of the Day on iPlayer and highlights on repeat on YouTube!

We only stayed in San Pedro for two nights. And, the main reason for coming was to do the Indian Nose sunrise hike. Pick-up was at 4am but luckily the climb was not too steep and only took around 30 minutes. Then, we were treated to a gem of a sunrise over Lake Atitlan with the San Pedro, Agua, Fuego and Acatenango volcanos in the background.

It was the perfect last day in southern Guatemala as we were then heading to the central highlands.

Getting to Lanquin was not simple! We had booked a direct shuttle from San Pedro to Lanquin to pick us up at 5.30 am for the 12-hour drive. But, less than 12 hours before we found out that we were the only people booked on that shuttle, so the company weren’t going to run it. Instead, we had to get a water taxi to Panajachel at 6am. And then take a bus from there that left some time, apparently, between 7.30 and 8am.

Yet, despite taking a boat across the lake, the drive still took 12 hours. Even though San Pedro to Panajachel is a 2-hour drive because the roads around the lake are not well connected. 12 hours of some of the bumpiest dirt roads ever. Unfortunately, Guatemala really lacks infrastructure. There are no big bus companies like in Mexico. Inter-city travel is mostly through private shuttles as the alternative of chicken buses normally means you need to make about 5 changes.

However, despite the bumps and extreme heat of the engine below our feet, the scenery was quite something. And, it was here that my obsession with Designated Survivor began as I had the first four episodes downloaded, then proceeded to watch all three seasons within 3 weeks! Maybe a political career is in my future, it’s quite easy to think you can be Prime Minister when the current standard is Boris, after all!

The main reason we – and everyone – visited Lanquin was to go to Semuc Champey. This impressive natural beauty has freshwater pools formed in the rock, where the river runs underneath through caves. Our visit here coincided with mine and Adam’s 10th anniversary and was the perfect fun day out

The whole day is an adventure starting off with caving. With a guide, you navigate through 900 metres of the caves with just a candle for light. Walking, swimming and climbing are all required – one-handed mostly as you need to keep the candle above water and alight.

Next up, we swam in front of the waterfalls before tubing back down the river. Another of those ‘how is this my life’ moments as we bobbed along the river, surrounded by jungle in Guatemala!

After lunch, we then headed up to the viewpoint of Semuc Champey to get a bird’s eye view of the whole place. The walk is hard, especially in the heat. But, the view is more than worth it!

After an equally sweaty walk down it’s finally time to swim in the refreshing pools of Semuc Champey. You can’t wear sun cream to protect the colour of the pools, the biodiversity and to prevent the water from getting contaminated from the build-up of every visitor’s sun lotion. As a result, we mainly swam in the shaded parts, but nevertheless, it was an amazing experience.

Lanquin to Flores is another 10-hour bus ride. Not helped, by the fact that the buses start off driving 2 hours in the wrong direction to Coban. And then have to drive the same road back on themselves towards Flores. Since we had spent our anniversary and 3-night stay in Lanquin in a dorm room, we treated ourselves to a fancy hotel in Flores. A double bed each was the dream!

Flores is a cute town located on a small island in the Peten Itza Lake. Being much closer to the Caribbean side of Central America, the island has a totally different feel and look to the towns on the Pacific side of Guatemala. Aside from a couple of days dedicated to doing nothing (this is a common theme in our trip), the main reason we were in Flores was to visit the ancient Mayan city of Tikal.

Hidden in the Guatemalan rainforest, it’s impossible to explore the whole site in a half-day trip. But, you can certainly see the best bits (and a good chunk else). While I’m far from someone who loves nature and ancient history, what I like about the Mayan ruins through this part of the Americas is how each still has something unique.

For Tikal, this was definitely how spread out the site was and the views you got from the top of the tallest temple over the jungle canopy. Another cool part is that while there are a couple of temples you can climb on the restored steps, for a few of the temples in Tikal they have built separate wooden staircases that bring you out at the top.

After Flores, it was time for surprise country number 4 of this trip – somewhere we didn’t expect to go. Stay tuned!