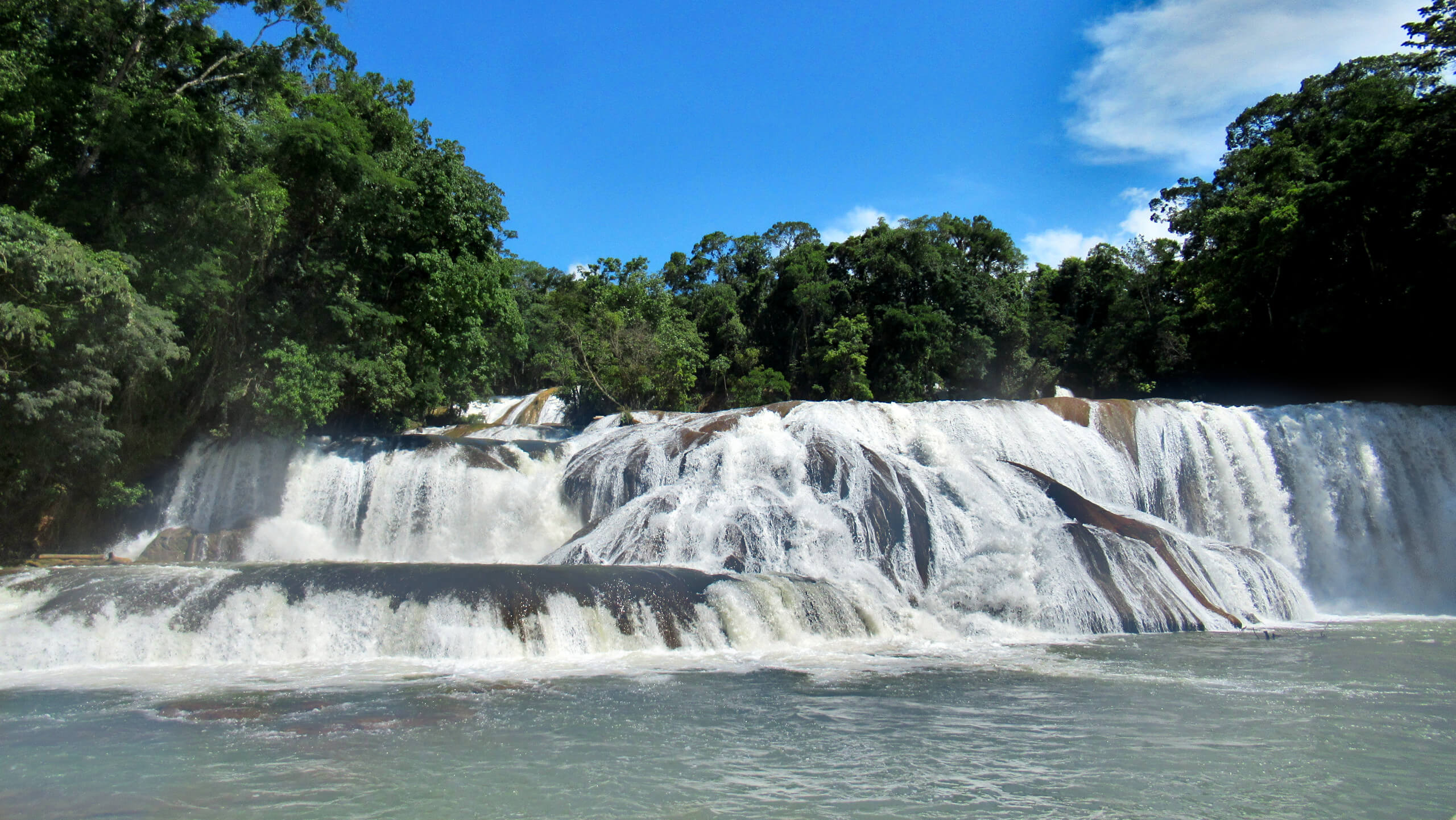 Fresh off of my 7-hour overnight bus ride from Chetumal, I arrived in the Jungle town of Palenque at 9am. With just 36 hours until I got my next night bus to San Cristobal de las Casas, I knew it would be a busy couple of days.

Palenque is a small city in the southern state of Chiapas. The city is most famous for being home to the ruins of the ancient Mayan city. Additionally, with the surrounding jungle, there are many day trips you can take to explore waterfalls and nature. And, this is exactly what I did.

After arriving in Palenque at 9am, I’d booked a tour to visit two waterfalls by 10am, and was picked up and out for the day by midday. On very little sleep, I should add. The first waterfall I visited was called Misol-Ha and it was definitely one of the most impressive I’ve seen.

You could view the waterfall from across the plunge pool but there was also a path taking you behind the waterfall. And, in the midday heat of the jungle, the mist from the waterfall was glorious! After spending about 40 minutes enjoying the view and taking lots of photographs, I headed off to the next waterfall of the day – Agua Azul.

Unfortunately, the road from Misol-Ha to Agua Azul was brutal. The narrow road snaked its way into higher and higher altitudes and round lots of bends. But, the worst part was the constant speed bumps! Mexico has so many and they’re everywhere. Not only that but they aren’t smooth half-cylinder shapes. Some are literal metal spheres stuck in the road, but most commonly they are just uneven mounds of concrete. Even on windy, uphill, jungle roads. Even on motorways. EVERYWHERE. They’re so rough that vehicles have to come to pretty much a complete stop, but being sat in the back of a people carrier, I still had my head smacked into the roof on more than one occasion!

Luckily, the waterfalls at Agua Azul were worth the journey! Although the rainy season had discoloured the usually bright blue water, the waterfalls seemed to go on forever. There were so many levels and eventually I made it to the highest lookout point for amazing views over the falls and the jungle. An exhausting but wonderful day!

The ruins in Palenque date back to between 226 BC and 799 AD. In the 1200 years or so since the dense jungle has completely overgrown the buildings. But, in recent years, excavation has started to expose and preserve these. It is estimated that just 10% of the total Mayan site has been excavated!

I was up bright and early to catch the collectivo to the ruins. Not just to beat the crowds but to ensure I was back in time to watch England-Ukraine at 2pm. Most of the ruins I had visited in Mexico so far were well-excavated and the sites were flat and generally had all trees around the ruins removed. But, Palenque was a much more rustic site, with steep jungle-covered hills rising high behind the ruins. While I definitely preferred the ruins at Uxmal that I’d visited whilst in Merida, there’s a charm to the almost hidden ruins at Palenque.

The final order of business before leaving for San Cristobal was to find somewhere to watch England vs Ukraine in the Euros quarter-finals. As luck would have it, the place I had stopped for lunchtime pizza also had a big screen and were showing the game. Albeit, with Spanish commentary. The bar was, however, the hottest place I have been to in Mexico! The outside real-feel temperature was 41 Celsius and this bar had about 2 wall fans. Nevertheless, by the time the 4th goal went in we (me, Adam and 3 other English people we met) were ordering celebratory tequila shots! A successful 36 hours in the jungle!

Arriving in San Cristobal was a shock to the system. The 10-hour night bus had been stopped three times. First by immigration officers wanting to see passports and visas for anyone foreign-looking. And then twice by police searching the luggage compartment. Plus, at 7am it was just 11 Celsius – I quickly put on as many clothes as possible!

The city of San Cristobal sits at 2200 metres above sea level. And, in summer, the climate is perfect for a pale-skinned girl like me! Every day the high temperature was around 25 Celsius, although at night it does get cold. I spent the second day battling an altitude headache. A headache which the NHS website kindly told me people don’t get below 2500 metres. I’ve spent my whole life at sea level, ok, give a girl a break!

What I did in San Cristobal

I ended up spending nearly a month in San Cristobal. This was in part due to the milder climate and low cost of living, as well as the many activities available. I could write a whole blog post on each of the things I did. But, to not bore you all, here they are in summary form.

I did two weeks’ worth of Spanish lessons while in San Cristobal. These were 3 hours a day (half conversation, half grammar), for 5 days a week. Not only is learning Spanish essential for the rest of my time in Central and South America, but the lessons were just £5 an hour each, with just Adam and me in the class.

Over the two weeks, I learnt several tenses and lots of vocabulary. I’ll definitely be stopping for more Spanish lessons in future. It’s already made a difference to being able to order things and get by.

The city sprawls across a valley floor, with the edges of the town climbing up the mountainsides. There’s a lot of variety in what you can do in San Cristobal, from museums to eco-parks, wine drinking to hiking.

My first highlight was visiting El Arcotete Ecopark. Here, I was able to explore caves and walk along rivers and up to viewpoints. Entry was just 10 pesos (about £0.35), so for that entry price alone, it was worth having a few hours out of the city.

My second highlight was exploring the streets of the city, these are lined with bars, restaurants and shops providing everything you need. Plus, there are two churches you can climb up (many) steps to, for epic viewpoints over the city. A notable mention must also go to the wine bar that had £1 glasses of wine that each came with a free plate of tapas!

Saving the best to last, my final highlight of the city was the mountainside viewpoint about 300 metres higher elevation above the city. The walk to get there is strenuous – it’s about an hour across the flat of the city before spending another hour climbing very steeply uphill. But, oh my was it worth it!

This was high on my must-visit list and it did not disappoint! By going with a tour, the day included a 2-hour boat ride through the magnificent canyon, followed by visiting 3 viewpoints at the top of the canyon and finishing with a visit to a nearby town for food.

The canyon was incredibly beautiful and no photo can do it justice. The canyon walls are up to 1 kilometre high in places, plus, there are waterfalls and wildlife to enjoy! The viewpoints were equally as stunning. The boats in the canyon looked as small as aeroplanes at 38,000 feet do from the Earth! If you’re ever in this part of the world, this is an absolute must.

Just outside of San Cristobal is the autonomous town of San Juan Chamula. The town is famous for just one thing – a Catholic-Indigenous mix church, where people sacrifice chickens.

It is a church unlike any other you have seen. Inside, there are no rows of seats, there’s no resident priest, no aisle. Rather, around the outside are statues of many Catholic saints. In front of them, people light candles to the saint of what they are praying for. The floor is covered in pine leaves with people kneeling, lighting rows of candles, performing rituals and praying to their God. Inside, there are 1000s of candles alight at any one time. The place has a total magical charm and no religious beliefs are needed to appreciate the wonder of that.

One of my last day trips in San Cristobal was to the truly magnificent El Chiflon waterfalls. Requiring a two-hour bus ride to Comitan and then a 45-minute collectivo to the entrance, this was a marathon of a day. The park has five waterfalls and you walk gradually uphill past the different waterfalls. The first couple of waterfalls were nice, but nothing could have prepared me for the size and majesty of the main waterfall – Cascada Velo de Novia. Can you spot me in the photo? I was busy getting a shower from the waterfall spray!

Cost of living in San Cristobal

In total, Adam and I spent 26 days in San Cristobal. Our average daily spend was just £62.70 (so £31.35 each) for everything. Travel & gadget insurance, Netflix, Spotify, Audible, food, drink, tours, laundry, phone data, Spanish school and accommodation. As well as a few new items of clothing for the cooler climate in San Cristobal.

We mostly stayed in a private room in a hostel (470 to 590 pesos [£17-£21.50] a night) but also treated ourselves to two slightly more expensive stays in an Airbnb (£40 a night) and hotel (£28 a night). One of the best perks of the hostel was that it included breakfast AND dinner in the price, so we only had to buy lunch and snacks each day.

San Cristobal is such a cheap place to live and is great for budget backpackers. It’s easy to see now why so many people come planning on staying a few days and are still here a few weeks later!

After San Cristobal, it was another night bus, this time to the town of Puerto Escondido on the Pacific coast. Stay tuned for how that turns out!

(Weeks 5 and 6) Holbox and Bacalar